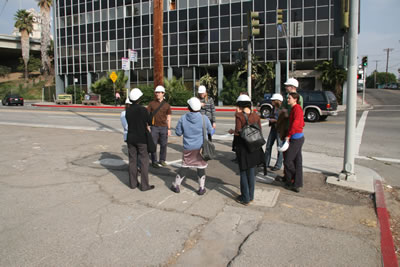 Where shall they park? The answer became clear as more and more municipalities, from Los Angeles to smaller centers, voted for city-funded open lots. At mid-decade, Andrew Mellon, secretary of the treasury, told Colliers magazine that he would like to move the Washington Monument for more parking lots.
A Brief History of Parking: The Life and After-life of Paving the Planet, Jane Holtz Kay, Architecture Magazine, February 2001

Parking Public is a research initiative documenting specific histories of public parking development as it relates to the more general ideology of utopian capitalism.
The Travel Office has been at work studying the changing context of parking in U.S. cities and towns, producing guided and self-guided tours to better understand how parking fits into our desires and frustrations for livable spaces.
Currently, we are looking at the shifting landscape of surface parking lots across the country, especially in cities and towns with urban centers.

These tours give Parking Public participants up close experiences with the spaces of public parking. Our goal with the tours is to historicize parking within the larger ideology of automobility and what Richard Davies has called an "Age of Asphalt."

Some documenation of our past tours is available to here, but you can also find more pictures of tours and locations on our flickr Parking Public set.

Check out our short video essay on the history of parking lots in the US.