...it is necessary to examine the social relations that the means of mobility afford and not only the changing form taken by the forces of mobility.
-- John Urry, Mobilities

For we live in the maps that the colonial surveyors bequeathed us.
-- Paul Carter, Dark Writing

One of the problems in studying "cancer clusters" - statistically high rates of cancer in a given area due to environmental conditions and contamination - is the increasing rate of migration of people over the course of their lives.
-- Richard Huggett, Fundamentals of Biogeography

The mMigration Research & Recreation Center will be a multi-use entertainment and educational facility serving the greater Champaign-Urbana area, and would be focused on various forms of migration. Multiple narratives of human, animal and geological movement in the region would be explored and documented through a media library housing videos, books, oral histories, photographs and digital archives.

The form of the mMigration Center will further visualize and encourage thinking about migration and mobility. Its primary facility will be prominantly located over the current iHotel and Conference Center South of the University of Illinois's flagship campus. Entry to the center will only be available through a satellite portal, located approximately 2 miles to the North, in a lot at the intersection of 5th and Hill Streets. From there an underground walkway and elevators will take visitors under the city and up to the center's 120 ft high facility.

The structure of the main building itself, hovering over the iHotel and Conference Center, is based on soil samples that document ground contamination of the lot at 5th and Hill Streets, where the entrance to the center will be located. This lot was once a manufactured gas plant that operated during the first half of the 20th Century, supplying lighting for Champaign and powering its interurban rail system.

Our proposal was submitted to the iHotel Conference Center as a commissioned art work, installed in the lobby in the Summer of 2009. 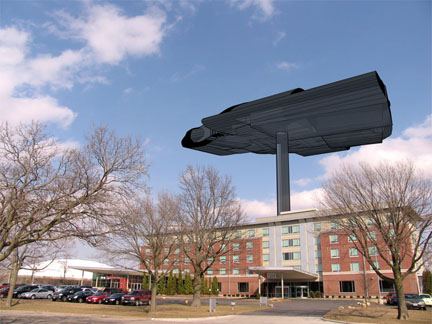 More images of the proposal.

The Migration to and from Manufactured Gas in Central Illinois: A Timeline

Produced primarily from coal, manufactured (or artificial) gas was a major industrial enterprise of the 19th and early 20th century. Manufactured gas plants (MGPs) provided the light for cities and towns migrating Westward. Coal tar, the primary byproduct of these plants, composed of 500-3000 mostly toxic compounds, became the foundation for a growing chemical industry. Literature of the time indicates an awareness of the negative health effects of the manufacturing process.
Scholars estimate that there were upwards of 52,000 manufactured gas plants in the United States.
Following resource shortages and changes in utility company operations occurring between the two World Wars, manufactured gas use declined. Increased availability and delivery of natural gas took over the remaining markets for artificial gas, with the vast majority of MGPs closing by the 1960s.
While many former MGPs (FMPGs) have been identified for remedial clean-up by the US EPA and state agencies, many more have been characterized as needing "no further remedial action".
The byproducts of FMPGs are characterized as floaters, sinkers and mixers, based on their density compared to water.

In the state of Illinois, MGPs thrived on the vast amounts of coal mined there and the mobility provided by a large network of railroads. Much of the early utilities were operated by local electric and street car companies until the early 1900s, when ownership began consolidating in Chicago, in companies like Samuel Insull's North American Light & Power Company (NAL&P). In Champaign, the Champaign & Urbana Gas Light Company opened a MGP at the intersection of North 5th and East Hill Streets in 1869. 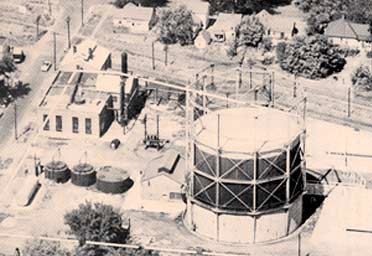 Champaign and Urbana, was serviced by the Illinois Traction Co. from 1904 until 1923, when it was acquired by North American Light & Power to form Illinois Power & Light Corporation (IP&L). In Champaign-Urbana, as in most of the towns it operated in, IP&L provided both transportation and electricity. During this time, IP&L was also buying hydroelectric power from utility companies operating on the Mississippi, Illinois and Fox Rivers.

In 1913, Union Electric Company began buying hydroelectric power from the Keokuk Dam on the mighty Mississippi for use 150 miles South, in St. Louis. This would be the greatest distance such quantities of electricity had ever traveled.

Another Union Electric hydroelectric initiative, Bagnall Dam, created the 1400 mile shorelines known as the Lake of the Ozarks.

The promotion of electrical use in rural areas was aided by the Committee on the Relations of Electricity to Agriculture, formed by a partnership between the University of Illinois, farm and manufacturing organizations and Central Illinois Public Service Company in the 1920s.

By 1934, most of the state had converted from artificial to natural gas.

Following changes in federal regulations for utility companies that resulted in several instances of restructuring, the Illinois Power Company (IP) would be formed and headquartered in Decatur, IL in 1943.

In 1955, the FMGP located at 5th and Hill Streets was demolished, excepting the "Booster House" which was used by American Legion Post 559 from 1971 until 1991. Due to reports about the toxic legacy of the FMGP, including groundwater contamination, the former owner, Illinois Power purchased the property back in 1991. Community groups form in 1990s in response, pressuring company and city officials to remediate the site.

In 1997, the Ameren Corporation was created out of the merger of two historic Midwest utilities, Union Electric and Central Illinois Public Service Company.

April 2009, $6-7 million remediation of a FMGP site at 5th and Hill Streets in Champaign begins and is expected to take at least one year. AmerenIP, the site owner, acknowledges that the remediation will not remove toxins such as Benzene from ground water, but suggest that the contamination is not dangerous to residents.

For more information on Manufactured Gas see Professor Allen Hatheway's research on the web and an archive of press and activism surrounding the remediation of the 5th & Hill site from the Champaign County Health Care Consumers.